My senses were partly restored as the summerhouse door crashed open and Howell bounded outside. The woman hissed like a wild animal, stopping only momentarily before continuing her advance. Howell set himself between the girl and the woman. ‘What business have you here miss?’ he rather calmly stated.

I was taken aback by the woman’s words, not so much by their meaning, for I understood the content, but more by her tone. Her voice belied her appearance, it was rather chilling yet alluring in its way.
‘Not tonight mademoiselle!’ was Howell’s response. 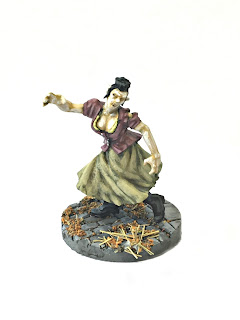 The woman walked forwards, taking little heed of Howell’s words. As she approached, he put himself firmly in front of the girl, who still appeared to be unaware of any of this. The woman stopped a few yards from Howell and once more beckoned the child forward, her long fingers running into long fingernails. It was then that I realised I had not moved from the door of the summerhouse, almost bewitched by the strange woman. She stepped forward and Howell raised his arm; with a speed I would not have believed, the woman pushed Howell aside with such force that he fell a good five or six feet from where he had stood. He rolled over the damp grass and drew his favoured Enfield revolver.

‘I do strongly suggest you stop there mademoiselle. My apologies for the use of the weapon’.

The woman turned towards Howell as he rose from the ground, revolver still trained on her. She covered the distance seemingly in one sweeping movement and although Howell had time to shoot, he did not. The woman clawed at him like an alley cat; Howell stepped backwards, but not quickly enough as she caught his arm, tearing through his coat. I could see by his face she had connected with more than just material and as he raised his other arm to protect it, I could see dark patches appearing as the blood seeped from the wound.
Posted by Sheraton Howell at 10:55