The Casebook of Sheraton Howell: Part V An Unusual Occurrence

I found myself at a coroner’s inquest early yesterday morning. There is nothing remotely unusual in such an event as it is a regular occurrence for a coroner. It was held in a rather splendid public house near Hyde Park, not a great distance from the location the victim was discovered in. I would not normally have covered this area, however, I was asked at a very late hour to step in for a colleague taken with sudden poor health. This is somewhat uncommon, but not unusual, despite the fact that the surgeon’s report was not made available until I arrived, giving one very little time to acquaint one’s self with the facts.

The scene was set for the inquest, with the body of the as yet unidentified girl laid out on a table in a side room, re-dressed in the garment she had been found in and covered until such times as the jurors were required to inspect the evidence. She had been found in the park, dressed only in night attire, with a deep and ugly cut across her throat. The girl was perhaps sixteen or seventeen with long dark hair and of slight build. Although her clothing (scant though it was) was of fine quality, her hands, feet and marks about her face suggested a life of hardship, pointing to a girl of little means. 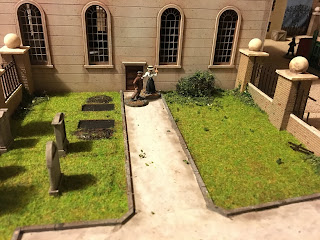 I had mere moments to scan the body. The cause of death was attributed to that deep cut across the throat of the girl, surely made by a person of some strength and with a blade of no small size. Several aspects of the case stood out, however:

i) The laceration to the throat had also caught the neckline of the nightdress, yet little blood staining was evident on the material. I had confirmed with the coroner's officer that the garment was as found. The tear was clearly cut and not simply ripped.
ii) The girl had been found on her back in a park shrubbery and was cold to the touch on recovery. However a quick examination identified that little blood had pooled to those areas where blood would be expected to settle following death and the position of the body. Neither had the blood settled in a different position after death as a light pressure applied to various parts of the body confirmed.

To be continued:
Posted by Sheraton Howell at 10:16