Although I was aware that with my newly acquired insight into the matter I was looking for evidence of the Undead (as an acquaintance of Professor Van Helsing refers to them) everywhere, I could not help but consider that this was such an occasion. Howell would have no doubt immediately removed the body for further examination, throwing the officers a shilling to enjoy the hospitality of the venue (though this would have been barely enough for three pints of beer in that establishment). No such contempt for procedure could be shown by an appointed coroner, however, I must have the patience to await the conclusion of the inquest for the day. At least that was what I anticipated; mere minutes later, just as the inquest was about to commence, a number of policemen entered the premises, ushering everyone out. 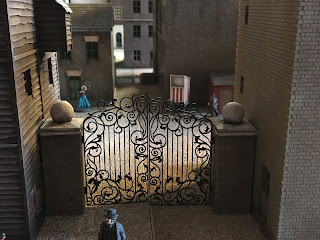 Naturally I challenged their apparent leader, an inspector in civilian clothing named Barnes. He provided documentation declaring the inquest postponed until further notice and furthermore, the body was to be removed by his men. He spoke little and would not engage me in discussion of the matter. There was very little I could do in such circumstances, but I did accost the youngest of their number, one Constable Ferry, to ask where they were from (my work with Howell and in inquests leads me to know many police officials, by face, if not by name). 'Arcadia Branch' he replied, before a burly sergeant clipped him across the ear, ending any further conversation.


Notes have been made and passed to Howell. We are to meet on Friday to discuss the case further.
Posted by Sheraton Howell at 10:20