We have wild work to do! Final part.

"Hurry Captain Fellows! We must hurry the sun is setting!"

The Captain and the Professor made short work of the rats and charged onto the dockside fully expecting  to meet further resistance. But the square was empty and quiet, eerily so, after the thunderous noise of the fighting during the preceding minutes it had suddenly fallen still and an ominous feeling overcame them.

Fellows looked around and could dimly make out the bodies of both policemen and ruffian types, but no enemies rushed to meet them.

"There is still time! look the crate it sits upon the cart, hurry Captain!" 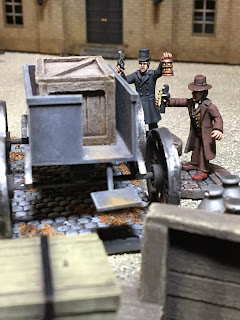 Both men ran across the square, and clambered onto the cart, The professor began to work on the screws on the corners of the great crate. Captain Fellows drew his hunting knife and began to prize the lid at the opposite end. The wood began to splinter and crack as they worked it loose.

"Wait!" exclaimed the Professor, "The light has gone! we must be ready for him, he will be fast!" He tossed the screwdriver aside, and retrieved  his crucifix which he raised above his head, he began to pray "Oh Might God, protect and deliver us from this Evil"

Captain Fellows gave the lid one final shove and it fell from the cart, crashing to the ground below. He raised his knife and turned to plunge it down into the crate but to his horror he realised it was  empty....

The Professor had stopped praying and was staring into the crate, all he could see was rotten fetid earth which lined the bottom and the faint imprint where a body may have been laid.

"This cannot be, how could he escape us again?"he exclaimed, sinking to he knees, his mood changing from one of triumph to one of despair.

"I don't understand" shouted the Captain, how could he have left the box before sunset?"

"He didn't" replied the Professor who had regained his usual composure, "He was never in it, it must have been a decoy, the real crate carrying the Master Vampire must have been dropped off earlier at some other destination along the river, he has tricked us again!"

Posted by Highgate Miniatures at 10:00