"We still have work to do!" The search for the Master Vampire continues, Final part

The sun had set and darkness had descended upon Whitechapel.  The Masters crate sat atop a flat bed wagon which had turned down a side street in an attempt to find a new path to the safe house. The wagon was stationary, the path forward was blocked by dead bodies, most of the Masters henchmen lay dead or dying, the Northern ruffians had either been killed or had fled the scene.

The plain clothes detectives had lost several men but were mostly in good shape and the Vampire Hunters all unharmed. Inspector Straker seeing his path to the crate clear he ran down a side alley and clambered onto the wagon and the crate itself. At that moment he realized his folly, he had no weapon about his person to destroy the Master!

Professor Hargreaves, one of the Vampire Hunters was racing towards him, shouting out " For Gods sake Man, stand clear, if you value your immortal Soul get out of there!"

Straker coming to his senses jumped clear of the box. Fortunately for him his actions were timely as a great force from within the crate blasted the lid clean off which shattered into a multitude of pieces and fragments on the ground behind. Emerging from the crate Straker could make out the form of a tall man or creature, his face concealed in the darkness. 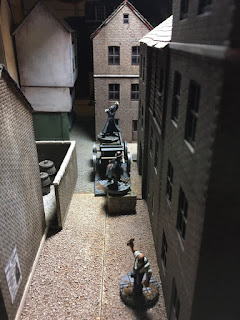 The last surviving henchman seeing his Master appear charged the nearest policeman only to be shot dead in a instant.


Professor Hargreaves raised his silver crucifx and advanced on the crate, calmly recounting prayers and the word of God in an attempt to drive off the Master.

The Master looked past Hargreaves seemingly unaffected by his words, he saw his path to the safe house blocked. From his mouth came a gutteral roar followed by a long hiss and in flash he had leapt from the crate across a wall into the yard of a nearby building. 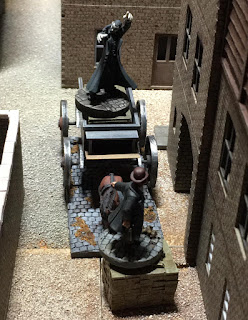 Hargreaves could vaguely make out the master as he ran across the yard and disappeared through the gates into the darkness....

" We had him!"  said Straker looking at Defenzles as he ran towards the  of the crate along with Professor Hargreaves. "We had him and I let him go!" he said again.

"Lucky for you that you did otherwise you would not be standing here now. Next time you enter the pit of the Viper take with you such weapon as to defend yourself!" responded Defenzlez. "We must hurry if we are yet to catch this fox tonight! Now we can account for eight boxes, yet two remain and he will lead us to them this night. And then we will end him for good!"

Posted by Highgate Miniatures at 15:48